Angkor Thom ( literally: "Great City"), located in present-day Cambodia, was the last and most enduring capital city of the Khmer empire. It was established in the late twelfth century by King Javavarman VII It covers an area of 9 km², within which are located several monuments from earlier eras as well as those established by Jayavarman and his successors. At the centre of the city is Jayavarman's state temple, the Bayon, with the other major sites clustered around the Victory Square immediately to the north was established as the capital of Jayavarman VII's empire, and was the centre of his massive building programme.

ANGKOR THOM is undeniably an ex

Angkor Thom, the last capital of the Khmer Empire, was a fortified cit enclosing residences of priest, officials of the palace and military, as well as buildings for administering the kingdom.

These structures were built of wood and have perished but the remaining stone monuments testify that Angkor Thom was indeed a "Great City" as its name implies. Temples inside the walls of the city described in this article are Bayon, Baphoun, Phimeanakas, Terrace of Elephants, Terrace of Leper King, Preah Palilay, Tep Pranam, Preah Pithu Group, Prasat Kleang and Prasat Suor Prat.

The French ascertained a general plan of the Royal Palace (see map opposite). It included the temple-mountain of Phimeanakas and surrounding pools together with residences and buildings for administering the capital, which were probably at the back of the enclosure. Jayavarman VII reconstructed the original site of the Royal Palace Palace to erect the city of Angkor Thom, which was centered on the temple of Bayon and surrounded by a wall.

Zhou Daguan the Chinese emissary, who provided the only first-hand account o f the Khmer, described the splendor of Angkor Thom.

At the center of the Kingdom rises a Golden tower Bayon flanked by more than twenty lesser towers and several hundred stone chambers. On the eastern side is a golden bridge guarded by two lions of gold, one on each side, with eight golden Buddhas spaced along the stone chambers. North of the Golden Tower of Bronze [Baphuon], higher even than the Golden tower. a truly astonishing spectacle. With more than ten chambers at its base. A quarter of a mile further north is the residence of the King rising above his private apartments is another tower of gold, These are the monuments which have caused merchants from overseas to speak so often of "Cambodia the rich and noble "

Symbolically, Angkor Thom is a microcosm of the universe, divided into four parts by the main axes. The temple of the Bayon is situated at the exact center of the axes and stands as the symbolical link between heaven and earth. The wall enclosing the city of Angkor Thom represents the stonewall around the universe and the mountain ranges around Meru. The surrounding moat (now dry) symbolizes the cosmic ocean.

The city of Angkor Thom consists of a square, each side of which is about three kilometers (1.9 miles) long a laterite wall 8 meters (26 feet) in height around the city encloses an are of 145.8 hectares (360 acres). A moat with a width of 100meters (328 feet) surrounds the outer wall. An entry tower and along causeway bisect each side of the wall except on the east where are two entrances. The additional one, called the "Gate of Victory "is aligned with the causeway leading to the Terraces of the Elephants and the Leper King. A small temple known as "Prasat Chrung' stands at each corner of the wall around the city of Angkor Thom.

An earth embankment 25 meters (82 feet) wide supports the inner side of the wall and serves as a road around the city.

A long causeway leading to each entry tower is flanked by a row of 54 stone figures on each side – demons on the right and gods on the left-to make a total of 108 mythical beings guarding the city of Angkor Thom. The demons have a grimacing ex

A serpent spreads its nine heads in the shape of a fan at the beginning of the causeway. Its body extends the length of the causeway and is held by the gods and demons forming a serpent-like railing. It may symbolize the rainbow uniting the worlds of man and the gods. This representation is reinforced by the presence of Indra.

A small sandstone temple dedicated to the bodhisattva Avalokitesvara occupies each corner of the wall enclosing the city of Angkor Thom. An inscription at the temple names Jayavarman VII as the builder and gives the charter of the foundation of the wall and moat of the city. Each temple is in the shape of a cross opens to the east with a porch on each side, and is crowned with a lotus-shaped top. Abase with two tiers supports the temple. Female figures in niches and false windows typical of the period decorate the exterior. The upper half of the window is sealed with laterite blocks in emulation of an awning; the lower half contains balusters.

Through here all comers to the city had to pass, and in honor of this function it has been built in a style grandiose and elegant, forming a whole, incomparable in its strength and ex

The five entry towers are among the most photographed of all the ancient Cambodian ruins. Each sandstone tower rises 23 meters (75 feet) to the sky and is crowned with four heads, one facing each cardinal direction. The faces may represent the rulers of the four cardinal points at the summit of mount Meru.

The lower half of each gate is modeled like an elephant with three heads. Their trunks, which serve as pillars, are plucking lotus flowers. The Hindu god Indra sits at the center of the elephant with an Apsara on each side. He holds a thunderbolt in his lower left hand.

Looking through the tower one can see a corbel arch, a hallmark of Khmer architecture. Inside, wooden crossbeams are visible and a sentry box stands on each side. 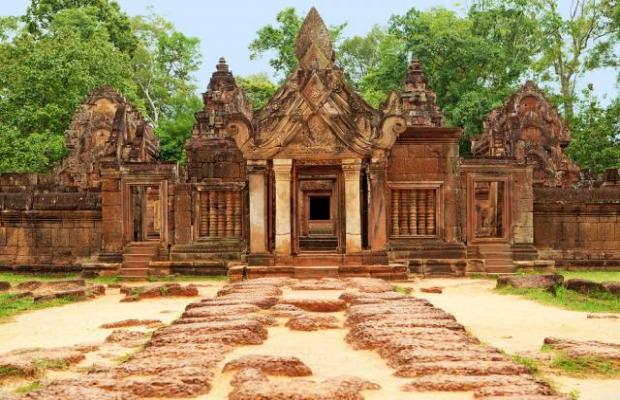 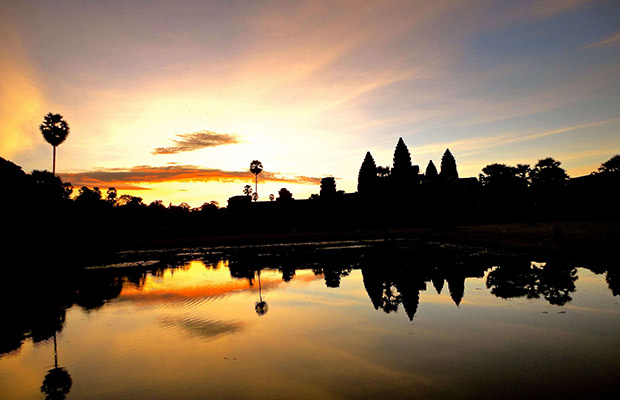 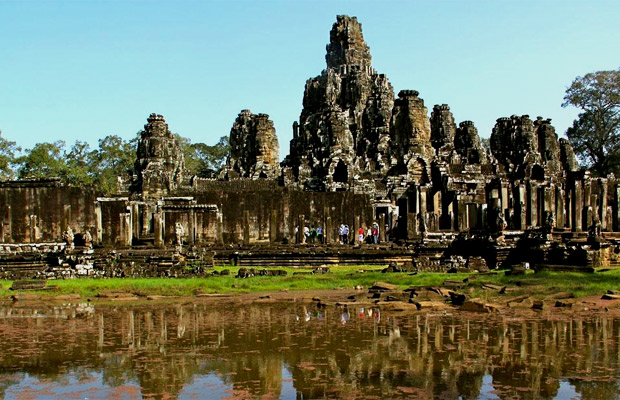 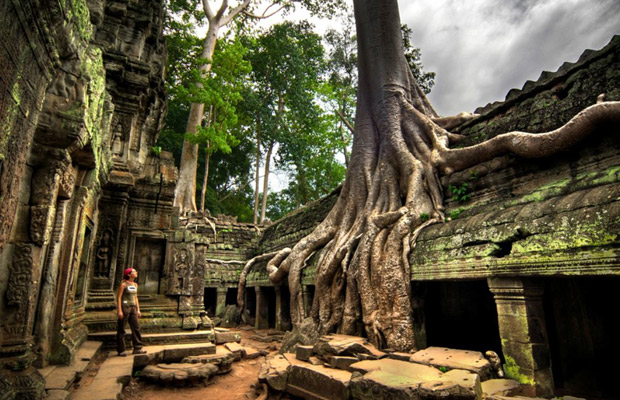